Whilst the Entertaining scene in Malta is at the moment hung up with the ISLE OF MTV Music Week, it seems that everyone keeps ignoring the fact that not everyone in this country forms part of the mainstream. It is taken for granted that here in Malta as it’s a small island and Roman Catholic there’s no room for subcultures.

One of the Subcultures I’m talking about is GOTH!!

To start out with, an explanation of the term GOTH, refers to the whole spectrum of the so-called underground black scene with all its sub-genres like dark wave, gothic, EBM, industrial, fetish, etc. in one sentence, those socially unacceptable with a need to be and express themselves without stereotyping.

And I can say that I’m one of them……to be exact an old school goth!

I Love Gothic Rock, Love Gothic Fashion and like to enjoy myself. As to the bad perception that people have about Goth. I don’t always wear black as much it is my favourite colour. I don’t drink too much or do any drugs. I don’t form part of a satanic cult. don’t have piercings and tattoos although I love them on others but not for me, perhaps I’m afraid of needles!!

These are some of the stereotyping comments most commonly done towards Goths because the misunderstood is dangerous to the ignorant. Perhaps if goth rock did not remain unknown, Goths would be treated like normal people. Gothic rock is a genre alternative rock that originated during the late 1970s. Originally bands from the genre had strong ties to the English punk rock and emerging post-punk styles. The genre itself was defined as a separate movement from punk rock during the early 1980s. Gothic rock artists dealt with dark themes and intellectual movements such as gothic horror, Romanticism, existential philosophy, and nihilism. Notable gothic rock bands include Joy Division, Siouxsie and the Banshees, Bauhaus, The Cure, The Sisters of Mercy, The Mission, Sex Gang Children, Southern Death Cult (which then changed to Death Cult until lastly became The Cult), Killing Joke, Skeletal Family, Specimen, Alien Sex Fiend, Fields of the Nephilim, Rosetta Stone, London After Midnight. Most of the early gothic rock bands were from the UK, although some bands came from other countries; Christian Death came from Los Angeles, The Virgin Prunes from Ireland and Xmal Deutschland from Germany. You’ll find an A-Z list of Gothic Rocks Band old and new on http://www.gothicscenemalta.com

Gothic rock gave rise to a broader goth subculture that includes goth clubs, goth fashions, and goth-oriented magazines. The Goth subculture has influenced different artists – not only musicians – but also painters and photographers. In particular their work is based on mystic, morbid and romantic motifs. In photography and painting the spectrum varies from erotic artwork to romantic images of vampires or ghosts. In 1983 London Soho Club – The Batcave became the prototype Gothic Club using props like swirling smoke, rubber bats, and cobwebs as club décor.  Regulars adopted appropriate dress which lead to goth. Goth fashion is stereotyped as a dark, sometimes morbid, eroticized fashion and style of dress. Typical gothic fashion includes dyed black hair, dark eyeliner, black fingernails, black period-styled clothing; goths may or may not have piercings. Styles are often borrowed from the period and often express religious imagery such as crucifixes or ankhs. The extent to which goths hold to this style varies amongst individuals as well as occupation, though virtually all Goths wear some of these elements.  Camden Town London is famous for all the shops which cater mostly to Goth fashion. Gothic is often confused with heavy metal/goth metal/Emo Punk. Outsiders often mistake fans of heavy metal for goth, particularly those who wear black trench coats.

Similar Clubs as The Batcave kept emerging especially in the UK where nowadays you’ll find goth clubs around the world mostly in the UK, the US and Germany.  Even though here in Malta the goth scene is much on a smaller scale than places like London, Berlin and Los Angeles there’s even space for Maltese goths to be entertained.  Organising inhouse goth parties simply to have the fun of which Goths have been deprived along the years due to the surrounding mainstream noise being too loud.  And why not in a normal Club like all the “normal” people.  Events have started to gain popularity and proper Club nights since the 1990s are being held.   Soon to come on the First Saturday in July after the Chaos would have passed an event shall be held to make up for the whole week pertaining all to the Mainstream music. 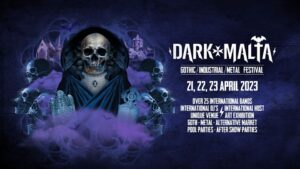 Dark Malta Festival is Back, promising again 3 Days of Darkness with once again a Great Line Up of Bands/Artists and DJs. This Year the Festival will also host After Show Parties and Goth Pool[...]
View Calendar
Add